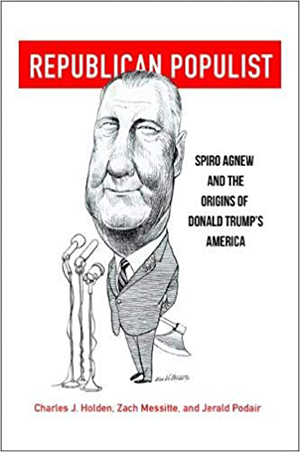 Typically a maligned figure in American political history, former vice president Spiro T. Agnew is often overlooked. Although he is largely remembered for his alliterative speeches, attacks on the media and East Coast intellectuals, and his resignation from office in 1973 in the wake of tax evasion charges, Agnew had a significant impact on the modern Republican Party that is underappreciated. It is impossible, in fact, to understand the current internal struggles of the Republican Party without understanding this populist "everyman" and prototypical middle-class striver who was one of the first proponents of what would become the ideology of Donald Trump’s GOP. Republican Populist examines Agnew’s efforts to make the Republican Party representative of the "silent majority." Under the tutelage of a group of talented speechwriters assigned to Agnew by President Richard Nixon including Pat Buchanan and William Safire, Agnew crafted the populist-tinged, anti-establishment rhetoric that helped turn the Republican Party into a powerful national electoral force that has come to define American politics into the current era. A fascinating political portrait of Agnew from his pre–vice presidential career through his scandal-driven fall from office and beyond, this book is a revelatory examination of Agnew’s role as one of the founding fathers of the modern Republican Party and of the link between Agnew’s "people’s party" and the fraught party of populists and businessmen today. Hardback: 272 Pages Publisher: University of Virginia Press (2019)