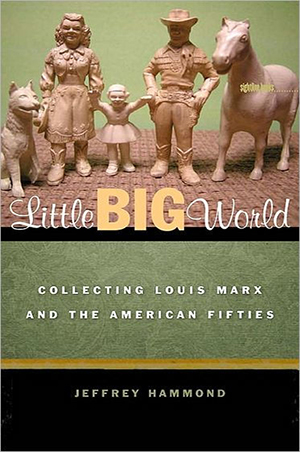 Hammond’s Little Big World: Collecting Louis Marx and the American Fifties is the story of a middle-aged man’s sudden compulsion to collect the toys of his childhood: specifically themed playsets produced by the Louis Marx Toy Company. Hammond never made a conscious decision to become a collector of any kind, so he was surprised when his occasional visits to web sites turned into hours spent gazing at, and then impulsively purchasing, the tiny plastic people and animals in the Civil War set, the Fort Apache set, Roy Rogers Ranch, and Happi-Time Farm — just a few of the dozens of playsets the Marx Company produced. Hammond interweaves childhood memories with reflections on what they reveal about the culture and values of cold war America, offering an extended meditation on toys as powerful catalysts for the imagination of both children and adults. Never sentimentalizing his childhood in an effort to get his old toys back, Hammond exposes the dangers of nostalgia by casting an unsettling light on the culture of the fifties and the era’s lasting impact on those who grew up in it. Writing in a lovably quirky voice, Hammond not only attempts to understand his personal connection to the Marx toys but also examines the psychology of his fellow eBay denizens. In this warm, funny, and contemplative work, the reader encounters an online community of serious adult collectors who, as the author suspects, are driven to obsession by middle-aged nostalgia. When Hammond questions this preoccupation with the past, he comes to realize that his own collecting has prevented him from moving forward. With this insight, he offers an insider’s take on the culture and psychology of collecting. Hardback: 138 Pages Publisher: University Of Iowa Press (2010)