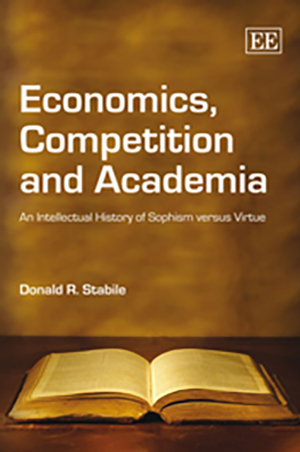 Stabile places current concerns over the commercialization of academia in a historical context by describing the long-standing question of the extent to which market economics can and should be applied to higher education. The debate between Plato and Aristotle on one side and sophists on the other provides a foundation for the modern debate of endowment versus tuition models. The author tackles the intellectual discourse over the mission of higher education and the effect markets and competition might have on it. The discussion encompasses the ideas on higher education of leading economic thinkers such as Adam Smith, Jeremy Benthan, John Stuart Mill, Alfred Marshall, Thorstein Veblen and John K. Galbraith and identifies them as supporters of either sophism or virtue. Included, too, are the thoughts of educators and policymakers influenced by free market ideas, such as Benjamin Rush, Francis Wayland and Charles W. Eliot, as well as those opposed to them. In addition, the author explores the development of collegiate business schools in the US and how they were justified on the basis of virtue. The book concludes with a section on for-profit colleges and their relationship to sophism. Hardback: 148 Pages Publisher: Edward Elgar (2007)