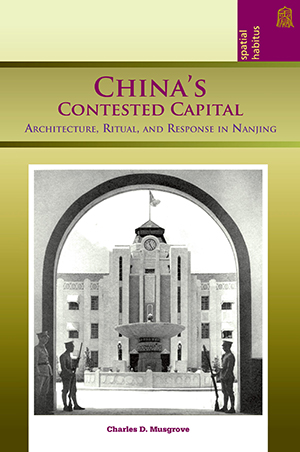 When the Chinese Nationalist Party nominally reunified the country in 1928, Chiang Kai-shek and other party leaders insisted that Nanjing was better suited than Beijing to serve as its capital. For the next decade, until the Japanese invasion in 1937, Nanjing was the “model capital” of Nationalist China, the center of not just a new regime, but also a new modern outlook in a China destined to reclaim its place at the forefront of nations. Interesting parallels between China’s recent rise under the Post-Mao Chinese Communist Party and the Nationalist era have brought increasing scholarly attention to the Nanjing Decade (1927–1937); however, study of Nanjing itself has been neglected. Charles Musgrove brings the city back into the discussion of China’s modern development, focusing on how it was transformed from a factional capital with only regional influence into a symbol of nationhood — a city where newly forming ideals of citizenship were celebrated and contested on its streets and at its monuments. China’s Contested Capital investigates the development of the model capital from multiple perspectives. It explores the ideological underpinnings of the project by looking at the divisive debates surrounding the new capital’s establishment as well as the ideological discourse of Sun Yat-Sen used to legitimize it. In terms of the actual building of the city, it provides an analysis of both the scientific methodology adopted to plan it and the aesthetic experiments employed to construct it. Finally, it examines the political and social life of the city, looking at not only the reinvented traditions that gave official spaces a sacred air but also the ways that people actually used streets and monuments, including the Sun Yat-Sen Mausoleum, to pursue their own interests, often in defiance of Nationalist repression. Contrary to the conventional story of incompetence and failure, Musgrove shows that there was more to Nationalist Party nation-building than simply “paper plans” that never came to fruition. He argues rather that the model capital essentially legitimized a new form of state power embodied in new symbolic systems that the Communist Party was able to tap into after defeating the Nationalists in 1949. At the same time, the book makes the case that, although it was unintended by party planners who promoted single-party rule, Nanjing’s legitimacy was also a product of protests and contestation, which the party-state only partially succeeded in channeling for its own ends. China’s Contested Capital is an important contribution to the literature on twentieth-century Chinese urban history and the social and political history of one of China’s key cities during the Republican period. Hardback: 328 Pages Publisher: University of Hawaii Press (2013)