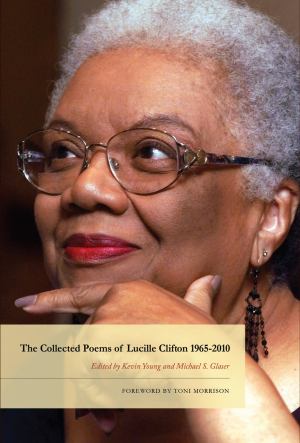 The Collected Poems of Lucille Clifton 1965 – 2010 combines all eleven of Lucille Clifton's published collections with more than fifty previously unpublished poems. The unpublished poems feature early poems from 1965 – 1969, a collection-in-progress titled the book of days (2008), and a poignant selection of final poems. An insightful foreword by Nobel Prize – winning author Toni Morrison and comprehensive afterword by noted poet Kevin Young frames Clifton's lifetime body of work, providing the definitive statement about this major America poet's career. On February 13, 2010, the poetry world lost one of its most distinguished members with the passing of Lucille Clifton. In the last year of her life, she was named the first African American woman to receive the $100,000 Ruth Lilly Poetry Prize honoring a US poet who’s "lifetime accomplishments warrant extraordinary recognition," and was posthumously awarded the Robert Frost Medal for lifetime achievement from the Poetry Society of America. Hardback: 720 Pages Publisher: BOA Editions (2012)